Since 10 November, Solana has been able to hold on to the $12.5 region as support. In the past couple of days of trading, the selling pressure proved too much for demand to keep up with, and prices took a hit. In the same period, Bitcoin also fell beneath a crucial support level at $16.2k.

The prediction bot goes for a value of $9.33 as the most bearish scenario for Solana in 2022. From a technical perspective, this target could be hit in the next month. How can bears look to profit in the short term?

The short-term bullish order block at $12.5 was beaten 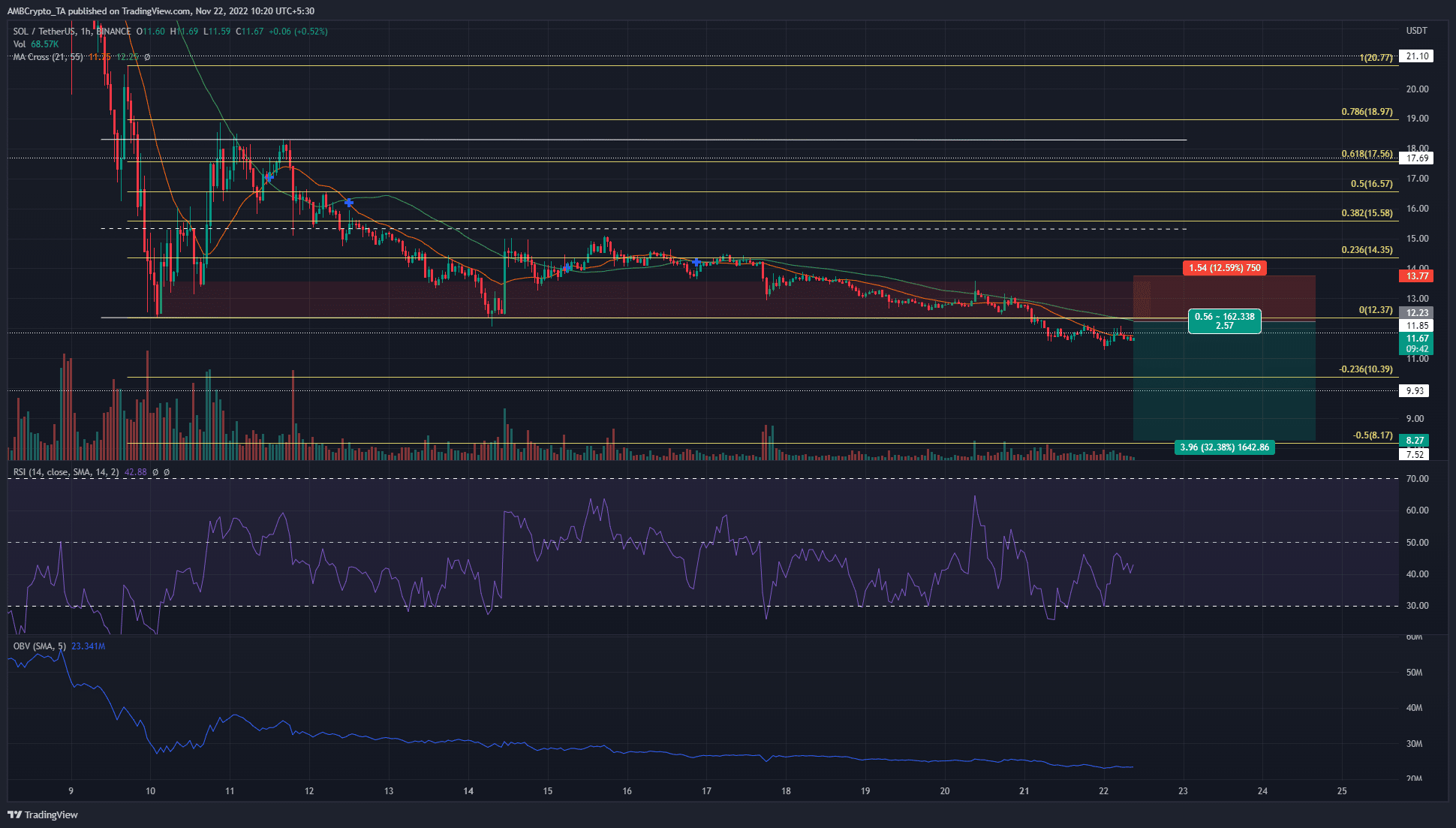 On 10 November, Solana fell as low as $12.37. Immediately thereafter, demand flooded into the market and propelled SOL to $18.3, just 18 hours later. In doing so, Solana established a short-term range (white) between these two levels. Another interesting development was that the $12.37-$13.57 region was demarcated as a bullish order block on the lower timeframes.

However, the outlook for Solana has not been bullish since then. The price was in steady decline over the past week, and was unable to climb past the mid-range resistance level at $15.33 (dashed white). In the past two days, Solana fell beneath the $12.3 level, and bearish dominance was evident once again.

The aforementioned bullish order block has now been flipped to a bearish breaker. A retest of this same zone would offer a selling opportunity, with invalidation above $13.65. The moving averages (21 and 55-period) will also pose resistance to SOL. The Relative Strength Index (RSI) was beneath the neutral 50 mark in the past week, with a brief foray above 50. The On-Balance Volume (OBV) also steadily crept lower. Therefore all the indicators agree upon selling pressure and bearish momentum.

The Open Interest peaked on 10 November as the sellers clambered into the market. The short-trade was overcrowded at that time, a fact that the funding rate made abundantly clear. At the time of writing as well, funding rate was slightly in the negative territory to show that bearish sentiment was beginning to take hold. But, the lack of a rise in OI meant that strong conviction might not be present yet.

The long/short ratio stood at 1.08 in favor of the bulls for the past 24 hours, who held 51.4% of the market according to Coinglass data. Based on all the evidence at hand, it was likely that bearish pressure remained dominant. Any move toward $12-$12.3 would offer a selling opportunity.