Shiba Inu [SHIB]  was the top beneficiary of massive whale action a few days ago as Ethereum [ETH] pumped millions of dollars into the SHIB ecosystem.

This series of like-minded decisions proved that the attention toward SHIB did not decline. Similarly, SHIB burned as many tokens as possible between the end of July and 1 August, leading to a price uptick from $0.0000117 to $0.0000124.

Additionally, the SHIB burn rate has also decreased by 18.21% over the last 24 hours.

However, it may seem that the burn rate drop was insufficient to get SHIB to succumb, as it rose above its struggling support level.

SHIB had struggled to hold support since the early hours of 4 August. Initially, it held steady at $0.00001176. Then, it lost the zone to trade at $0.001163. However, SHIB looks to have resisted further fall as it rose to new greens.

Still, making a hasty decision to follow a continuous uptick might be detrimental without looking at other indicators. A look at the Directional Movement Index (DMI) revealed that SHIB could sustain the green levels in the short term. 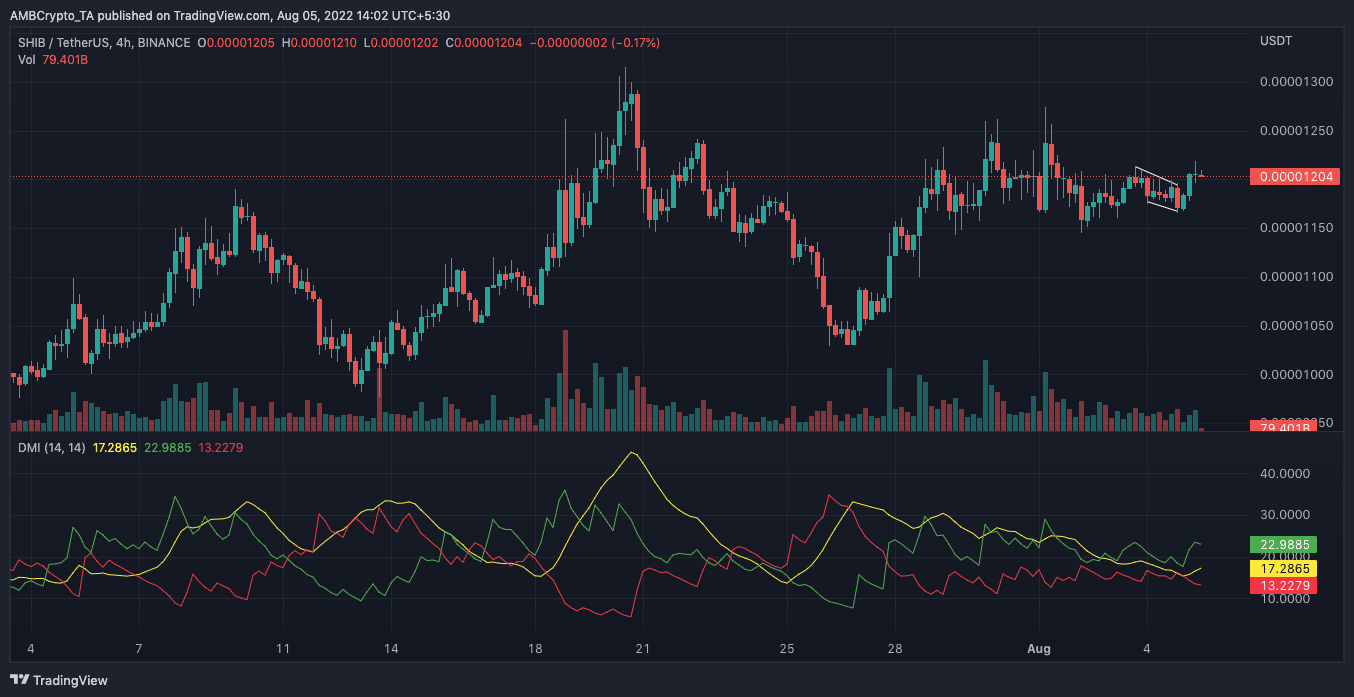 This was because the green line was above the red line, indicating that the buyers still had control. Additionally, the ADX (yellow) was below 25 (a weak directional movement), showing that it may not yet be time for a long rally. Still, the current state of SHIB looked stable enough to withstand a price plunge.

Amid the ups and downs, SHIB investor interest seemed to have been confirmed by the new Binance partnership. The world’s largest crypto exchange launched its debit card in Europe lately.

Interestingly, it found SHIB worthy enough to become one of the first meme tokens listed on it, following Ripple [XRP] and Avalanche [AVAX].

We are pleased to announce that @binance has added SHIB to the list of supported tokens for the Binance Card issued in Europe.

You can now pay with SHIB at 60+ million merchants worldwide. Furthermore, get up to 8% cashback and zero annual or FX fees!https://t.co/0Xj7IXPyt0 pic.twitter.com/FqINtnHFWx

This development comes as a follow-up to the Shopping.io integration earlier. So how well is SHIB doing on-chain?

As mentioned earlier, whale activity has reduced compared to the previous days. With active addresses skyrocketing to 20,648 on 2 August, it is no surprise that it has declined to 4665 as per Santiment data.