Cardano’s native cryptocurrency ADA has been hovering within the $0.49 and $0.55 price range since the end of July. This is after a bit of recovery from its bottom a few weeks ago.

This range suggests that the bullish momentum has been limited and some price observations suggest that more downward pressure might be on the way.

ADA’s price action has been moving within a descending price channel since November last year. The cryptocurrency has kicked off this week with a retest of a descending resistance line that is part of the price channel.

ADA has already pulled back slightly in the last two days, indicating that there is significant bearish pressure after the resistance retest. 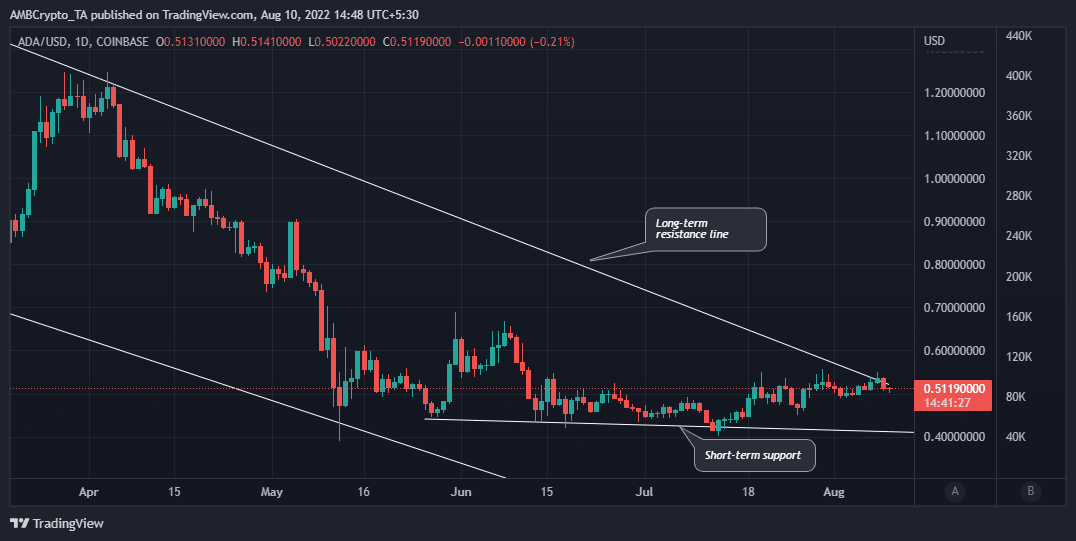 ADA would have to drop substantially from its current position in order to retest its long-term descending resistance line. However, price behavior near the recent lows in the last few weeks has already formed a short-term support pattern.

An extended bearish pullback would likely retest the short-term support near the $0.41 price range.

ADA has so far managed to stay above the $0.50 price zone. This indicates that ADA long-term holders are still holding on, anticipating more upside. This reflects the RSI which has maintained its position above the 50% level.

However, the RSI’s 14-day short-term moving average (SMA) dropped from 60.18 to 52.42 in the last two days. This reflects the increase in short-term sell pressure, especially after the resistance retest.

On the on-chain front, ADA’s active addresses increased dramatically in the last few days. This reflects the buildup of selling pressure as the price interacted with the resistance line.

There were 41 whale transaction counts worth more than $1 million on 8 August. The outcome triggered the ongoing sell pressure, but on 9 August.

Despite the massive amount of ADA moved, bearish activity has been relatively subdued. The explanation for this might be in ADA’s circulation which has since dropped back to 8 August levels.

The increase in active addresses might be a sign that investors are moving their funds in anticipation of the upcoming economic information.

This might explain the limited selling pressure despite the large amounts moved.

It could be a sign that investors have moved their funds to exchanges in anticipation of the economic outcome.

An unfavorable outcome may result in a stronger wave of sell pressure.

On the other hand, buyers might be waiting for the right conditions to buy more and potentially extend ADA’s upside.