A market wrecking cyberhack has hit the ninth biggest blockchain Solana (SOL). The current statistics report that roughly 8 million funds have been drained across several Solana wallets. This was confirmed by Solana taking Twitter to announce the extent of the security exploit that began on Tuesday.

According to Solana, which is still looking into the attack, the source of the exploit has not yet been found. However, according to Austin Federa, the manager of communications for Solana, it appears to have affected “a software dependency shared by multiple software wallets.”

Binance revealed that users’ assets had been stolen as investors panicked and analysts raced to figure out what had happened.

Mainly, merchants using the digital wallets Phantom and Slope complained that their funds had been syphoned off. Both wallet providers confirmed that they were looking into the matter.

The hack has impacted popular Solana wallets including Phantom, Slope, and TrustWallet. Both the web and mobile can be used to use a hot wallet.

Who Is Behind Solana Hack?

According to a tweet from SolanaStatus, engineers from several networks have discovered that the fault is not related to the core Solana code but to software used by several software wallets.

Tuesday night saw a continued lack of clarity regarding the attack’s precise origin, but it appears to have mostly affected users of mobile wallets. A reputable third-party service may have been compromised in a so-called supply chain attack if the attacker acquired the capacity to sign transactions (i.e., initiate and authorise them) on behalf of users. 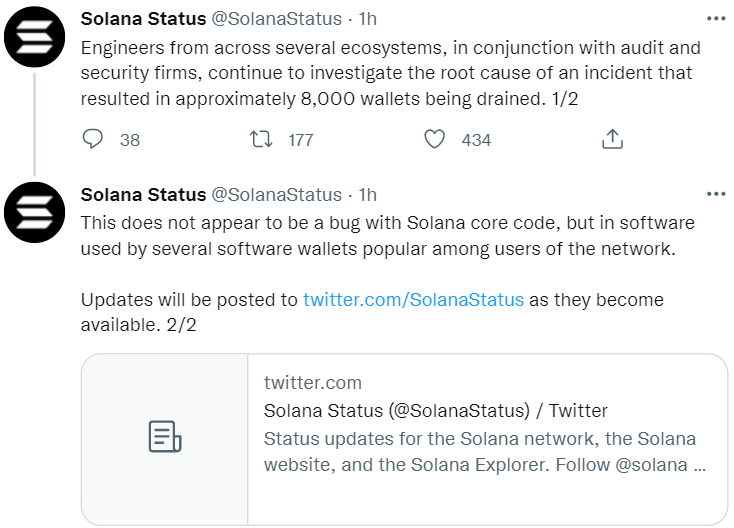 “We are investigating the Solana wallet incident and coordinating with other teams within the ecosystem to find out what happened. Once we have more information, we will release an update” (@phantom), Phantom spokesperson, the biggest Solana hot wallet, said in a statement. “We do not currently believe that this is a Phantom issue.”

Although this link became less evident as the attack widened, several users were first under the impression that the hack might have something to do with transactions on Magic Eden’s Solana-based NFT marketplace.

The Nomad Bridge incident, in which the attacker got off with around $191 million, happened the day before the hack on the Solana ecosystem.

Hack Not Limited to SOL and Phantom

The attack spreads, indicating compromised private keys, a more concerning subject. If this is the case, wallet owners have few options for preventing money theft.

As reports are coming out, it became clear that the hack was not just for SOL and Phantom wallets. Some also reported their USDC holdings to be going down recently. Recent tweets from OtterSec indicate that hackers also focus on other wallets, including TrustWallet, Solflare, and Slope.

The hack will unavoidably revive a long-running discussion about the safety of hot wallets, which users use to send, store, and receive cryptocurrency and are always online. Cold wallets are hailed as a more secure, albeit less practical, option. These USB devices must be plugged into a computer to sign transactions.

According to Vikram Subburaj, CEO of Giottus Crypto Platform, 8,000 wallets from hot wallets connected to the internet have been compromised, and the attacker appears to have mistakenly obtained the mandate to “initiate and authorise” transactions.

The most recent attack has revived the long-running debate over the security of hot wallets, which are always online and give users a simple way to transmit, store, and receive cryptocurrency.

“Customers, investors, and traders would be wise to move to reputable exchanges that offer many layers of security. Additionally, they might employ hard wallets to stay away from third-party wallets,” the CEO added.

How To Protect Yourself From Solana Hack

Here are the three steps for you

Step 1: Write It Down Rather Than Typing It Down

The first and most crucial step in creating a new wallet is to keep your seed phrase private because it serves as the key to your wallet.

Now you ask how to store your seed phrase properly. Writing it on paper is the answer and not on your devices; never write it in a note or document, never drop it by air and never copy or paste it because doing so necessitates storing the information on the cloud.

Your wallet is at risk if your seed phrase is discovered. Maintain security by keeping it off of digital devices and the cloud.

You have a variety of wallet alternatives inside the Solana ecosystem, including Phantom, Sollet, and Solflare. Make 4 distinct wallets, each with a unique key phrase (not just a new wallet in the same Phantom wallet).

You can also go for eToro wallet as it offers the best in class safety and security to its users.

Step 3: Use Tools To Secure Solana

We advise these security tools created by your Famous Fox Federation and Joe Shmoes friends to provide extra layers of security to your protection.

Many tweets have advised moving your ledgers into cold storage for preventive purposes.

The current price of Solana is 40.23 USD with a twenty-four-hour trading volume of around $2 billion. SOL price is down -2.6 per cent in the last 24 hours. The market cap is 13 billion USD, with a circulating supply of 346 million.