Wolfspeed (WOLF) believes the semiconductor industry is in the early stages of a once-in-a-generation technology shift. And Wolfspeed stock could lead the pack during the shift, thanks to the company’s expertise and investments.

Silicon carbide, or SiC, has superior properties vs. traditional silicon in chips for high-voltage applications.

“The market is exploding from a growth perspective,” Wolfspeed Chief Executive Gregg Lowe said Sept. 8 at the Evercore ISI Technology, Media & Telecom Conference. “This isn’t something that happens all the time in semiconductors. This is an enormous shift that happens about every 50 years. The last time there was a shift like this was when digital transistors went from bipolar to CMOS (complementary metal-oxide semiconductor).”

“There’s a whole valley in California named after silicon. And that’s going away in the high-power electronics market and moving to silicon carbide,” Lowe said. “And it’s fascinating to see across automotive, industrial, solar, etc.”

About Your Online Broker.

“Electric vehicles opened up the doors to broad adoption of silicon carbide, and this will be our anchor market for decades to come,” Lowe said on an Aug. 17 conference call with analysts.

Research firm Evercore ISI rates Wolfspeed stock as outperform, or buy, with a price target of 155.

“We continue to view WOLF as one of the best levered stories to EV adoption (with SiC driving extended vehicle range, fast charging, and system cost downs),” Evercore analysts said in a recent note to clients. “The company’s best-in-class management team and clear path to a commanding cost leadership position will drive meaningful EPS (earnings per share) growth from here.”

However, Evercore noted that investors have concerns about Wolfspeed’s high valuation and its aggressive capital spending plans.

The company changed its name to Wolfspeed from Cree in October 2021 after selling its legacy LED business to Smart Global Holdings (SGH). LED is short for light-emitting diode.

Since then, Wolfspeed has been ramping up its production and investments in silicon carbide materials and devices.

In April, Wolfspeed opened the world’s largest semiconductor fab for making silicon carbide chips from 200-millimeter wafers. The state-of-the-art, highly automated fabrication facility is in Marcy, N.Y. By contrast, its older fab in Durham, N.C., has a labor-intensive workflow. 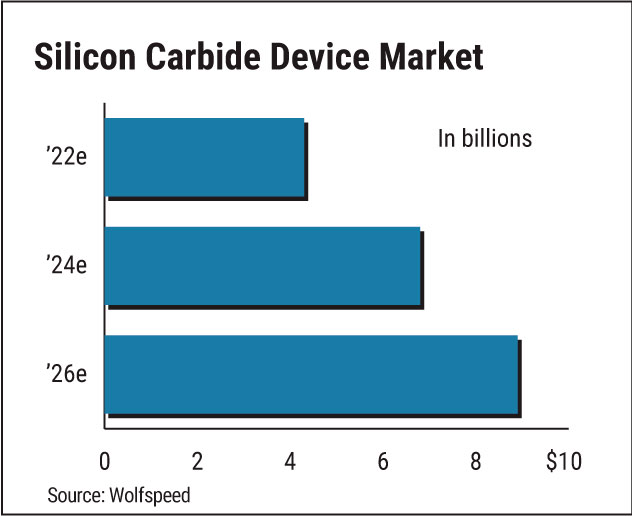 On Sept. 9, Wolfspeed announced plans to build a factory in Chatham County, N.C., to produce 200-millimeter silicon carbide wafers. Those wafers can produce more chips per wafer and at a lower cost than current 150-millimeter wafers, the company said.

It will produce wafers for its own chip plants as well as for rival SiC chipmakers including Infineon, Onsemi (ON) and STMicroelectronics (STM).

Wolfspeed has roughly 60% market share in silicon carbide wafers, the company said. It also hopes to receive some financial assistance from the U.S. government for its factory expansions as part of the recently enacted CHIPS Act. 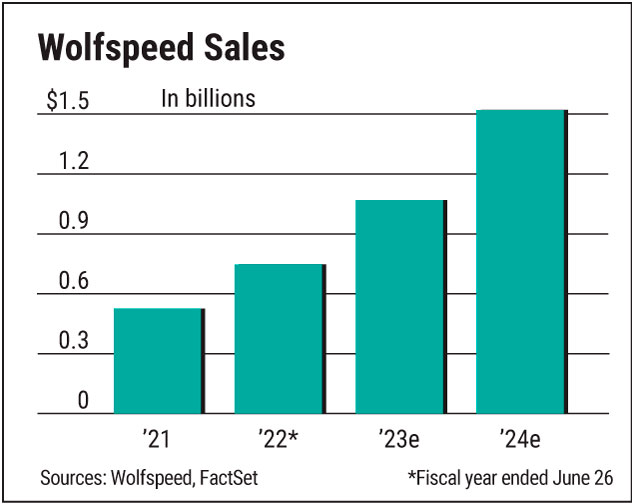 Today, silicon carbide chips make up just 5% of the power semiconductor market. SiC chips could reach 20% of the power market by 2027, Lowe said.

Wolfspeed stock hit a record high of 142.33 on Nov. 15. But it lost 59% of its value in the stock market correction this summer.

However, it rocketed after a better-than-expected fiscal fourth-quarter report on Aug. 17. Wolfspeed stock surged nearly 32% on the first trading day after its report.

For the current quarter, it forecast an adjusted loss of 5 cents a share on sales of $240 million. That’s based on the midpoint of its outlook. 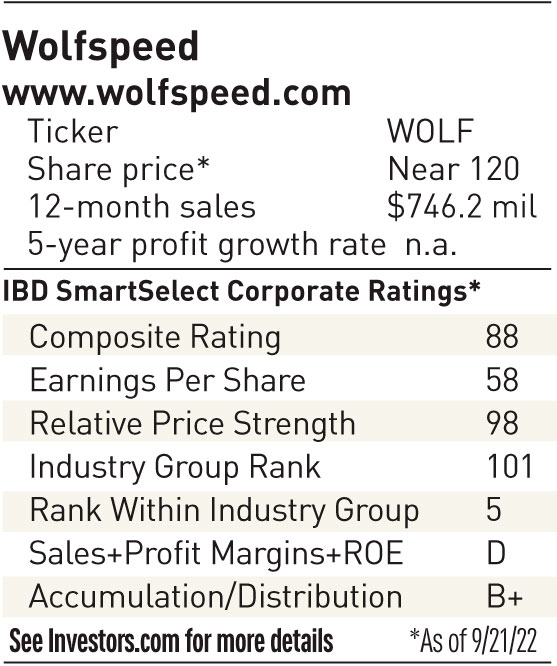 The company has set a revenue target of $2.8 billion for fiscal 2026. By comparison, it posted $746 million in sales in its recently finished fiscal 2022. Wolfspeed expects over half of its sales in 2026 to come from the automotive sector.

The next catalyst for Wolfspeed stock could be its September-quarter earnings report, due in late October. The company also has a financial analyst day planned for this fall.

Wolfspeed stock ranks fifth out of 31 stocks in IBD’s Semiconductor Manufacturing industry group, according to IBD Stock Checkup. It has an IBD Composite Rating of 88 out of 99.

Looking For The Next Big Stock Market Winners? Start With These 3 Steps

See Stocks On The List Of Leaders Near A Buy Point

MarketSmith: Research, Charts, Data And Coaching All In One Place