Algorand blockchain still commands a decent market capitalization of $2,127,730,260, with just 69% of ALGO tokens in circulation. Despite its services surrounding smart contracts and decentralized applications using an iterated version of permissionless Proof of Stake to increase the transaction speed and cost compared to Bitcoin.

Algorand Foundation announced a $10 million fund to create the London Bridge to bring Ethereum compatibility to its blockchain. This step could create bi-directional liquidity flows, offering an ambient growth environment for the Algorand blockchain. The current use of ALGO tokens remains limited to paying for fees within the network.

Algorand price action shows that it took 20 months to scale the gains beginning from March 2020. At the same time, the ALGO token lost tremendous value in just 9 months, bringing it back to similar levels as April 2020. With back-to-back breaches of its support levels and failure to consolidate to halt price decline can cause further price fall. 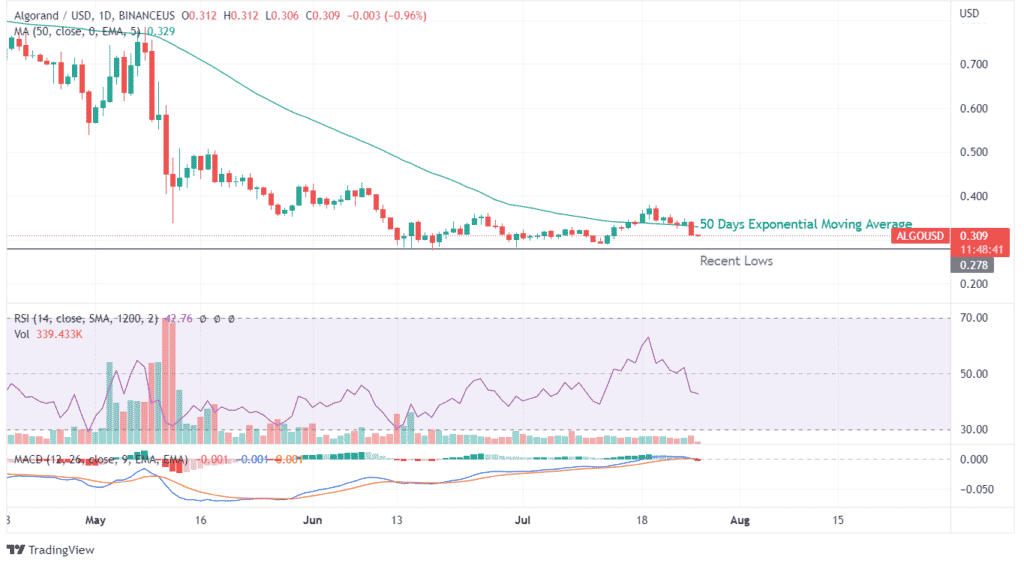 On daily charts, the Algorand price action is facing a strong resistance near $0.36, which was elevated to $0.38. Despite hitting a higher high on the swings of June and July, a lack of buying sentiment has weighed heavily on holders.

The marginal drop in valuation took half the time to erode. RSI, in the meantime, indicates negative momentum, while MACD has marked a bearish crossover highlighting the possibility of further decline. The breach of 50 EMA brought a positive response but succumbing to it within two days has created a high negative sentiment that warrants restraint on the idea of averaging out. Should you be worried about this downfall in ALGO price? Read our Algorand prediction to know! 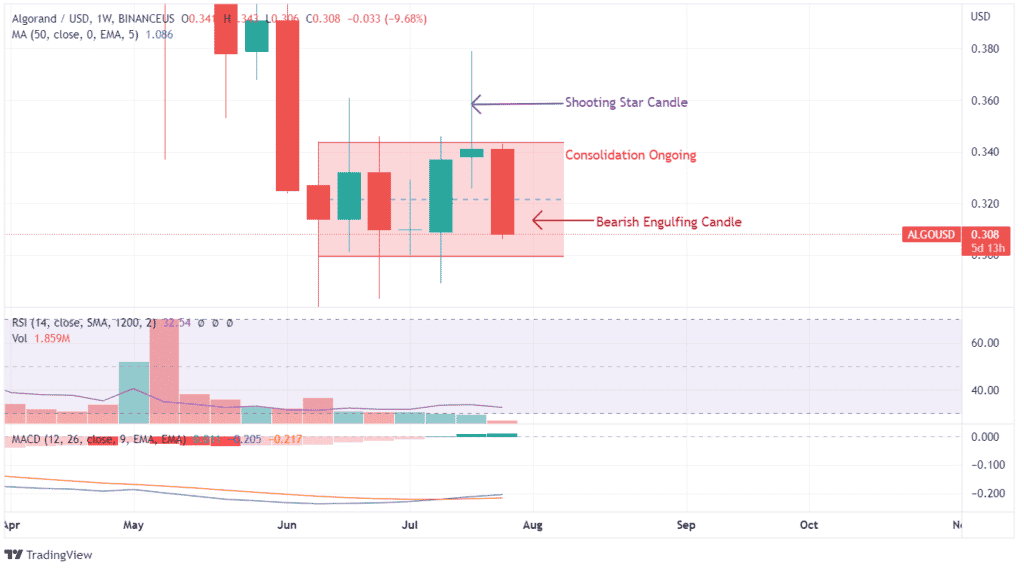 On the weekly charts, a consolidation pattern emerges with each positive candle followed by a negative or profit booking scenario. The formation of two back-to-back positive candles in July created some confidence toward ALGO continuing a bull run. However, facing resistance at $0.365 pushed the value down, creating a shooting star pattern with a high probability of a negative price movement in the following week.

As the negative candle is just two days old, the price action indicates a bearish momentum that has completely erased the gains made on the two previous positive candles. RSI for Algorand is trading close to oversold zones with MACD creating a bullish crossover. Hence, there is a small probability that the present weekly candle might create a lower wick and push ALGO to new highs