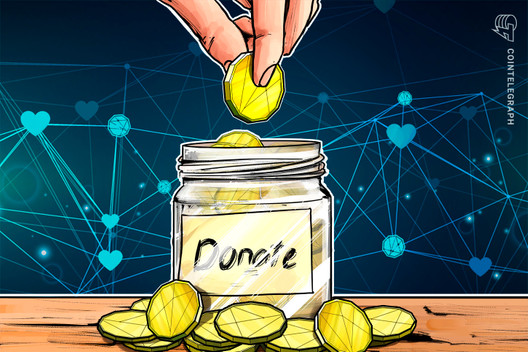 Online supporters have donated nearly $100,000 in cryptocurrency to white supremacist and alt-right activist Stefan Molyneux following his removal from YouTube for “fomenting violence and hatred.”

After Molyneux posted a video to his Twitter account on June 29 stating YouTube had banned him from the platform, he issued a request for donations in cryptocurrency through his website. The alt-right figure lists addresses for Bitcoin (BTC), Bitcoin Cash (BCH), Ether (ETH), Dash (DASH), Skycoin (SKY), Dogecoin (DOGE) and Monero (XMR).

As of press time, his supporters have sent 433 BCH, dozens small Bitcoin transactions of mostly 0.001 BTC or less, three small ETH donations totaling roughly $10, 0.3 DASH, no Skycoin, and no DOGE. Altogether, the white supremacist netted about $100,000 in crypto since June 29.

Molyneux made a similar request for crypto donations to his social media followers in January, when YouTube revoked his channel’s YouTube Partner Program. This action prevented him from earning money on the platform.

“We have strict policies prohibiting hate speech on YouTube, and terminate any channel that repeatedly or egregiously violates those policies,” a spokesman for the platform told CNN in response to the ban, saying that Molyneux’s removal was part of an update to “better address supremacist content” promoting such speech.

The Southern Poverty Law Center (SPLC) describes Molyneux as “a skilled propagandist and an effective communicator within the racist alt-right and pro-Trump ranks” promoting scientific racism and eugenics. At press time, his Facebook and Instagram pages are still active, but his PayPal account was terminated in November.

Not all neo Nazis getting paid

The SPLC currently tracks identified Bitcoin wallets that help provide donations to neo Nazis like Molyneux. Spencer’s addresses have received only 0.88920026 BTC — approximately $8,135 at press time — but none of the donations were made following his channel ban yesterday. The only known address for American Renaissance shows no donations at all.

The center says hate group leaders and other influential extremists prefer crypto donations because “no company and no government” can intervene to stop the money from flowing to less-than-reputable causes.

Some groups like the SPLC have at least attempted to track any funds going towards white supremacists. Cointelegraph reported following the alt-right rally and murder in Charlottesville that a Twitter bot — NeonaziWallets — was providing updates every time a BTC transaction is posted to known wallets controlled by neo-Nazis.