Bitcoin experienced high tension during yesterday, with high volumes and volatility that saw the daily index on a monthly basis rise to over 2.8%, the highest level since last June.

The rest of the sector was rather indifferent to the news that shook the financial markets yesterday. Yesterday’s S&P 500, Dow Jones, Nasdaq Composite recorded absolute historical highs and then fell.

The same downturn was evident for gold, which fell by 4%.

This all came after Pfizer‘s announcement, which stirred up the markets because it was subject to a possible reconsideration of a further injection of liquidity by the Fed.

The cryptocurrency and altcoin sector remained unaffected by the announcement and were not affected by Bitcoin’s impact.

The day recorded a prevalence of positive signs, over 70% above parity. Good balance on a weekly basis for the first 20, where only Monero (XMR) loses -1% together with Crypto.com (CRO) with a balance of -10%.

EOS is also among the best weekly increases with a jump of just under 10%, in line with the rest of the industry. Today, however, it drops by 1%.

The market cap continues to rise and for the first time since May 2018, it has risen to over $440 billion. This is due to Bitcoin‘s total capitalization of over $280 billion, the highest level it had not recorded since January 2018, which was the bull run phase that coincided with the bubble highs at the end of 2017 – beginning of 2018.

The dominance of Bitcoin is confirmed around 65%, which is the highest level of market share since last June. As for Ethereum and Ripple, Ethereum drops to 11.5%, while Ripple tries to maintain 2.5% which is the lowest level since 2017.

Exploding volumes for Bitcoin on spot and derivatives

Volumes on a daily basis also continue to rise to over $155 billion.

Bitcoin sees for the second time in a few days more than $4 billion on major exchanges, something that has not happened since last May.

Ethereum is trading around $1.5 billion for the sixth consecutive day. In contrast to Bitcoin, Ethereum was not particularly moved and such an intense series of trading volumes had not taken place since the beginning of last September.

Yesterday’s rises have caused volumes of put and call options hedges to explode. This highlights the intentions of a possible increase in speculation in the coming days. Much attention will have to be paid to movements.

On Ethereum, too, the volume for options is recording new absolute historical highs, with open interest (options held beyond the trading day).

For Ethereum, put options are more traded, so operators expect a continuation of the upward trend. 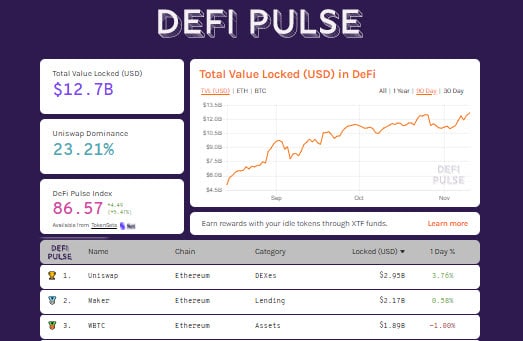 Volumes are also growing again in the DeFi sector, which for the first time is reaching over 12.7 billion dollars. The number of Ether locked in the various decentralized finance protocols is rising again, bringing it back to over 8.5 million ETH. More than 167,000 tokenized bitcoin are on the Ethereum network.

Among the best rises of the day are the tokens of the DeFi sector: Decentraland (MANA), Ocean Protocol (OCEAN), Yearn Finance (YFI), Aave, Status, gain +15%. On the opposite side, the worst drop is that of Loopring (LRC), -10%, the only double-digit downhill among the top 100.

The growth of Uniswap continues, one step away from the $3 billion locked on the exchange. Maker follows with 2.17 billion, and WBTC with 1.9 billion.

Bitcoin (BTC): volumes on the rise

Bitcoin, with yesterday’s rise, brings quotations back to $15,900 and then, as happened last week, brings back the sales that reject yesterday’s prices close to $14,800.

The medium-term trend remains firmly on the rise, but it begins to be important to follow the evolution of the movements in the next few hours or days.

A return under $14,800 would be a dangerous long-term double maximum.

For Bitcoin it is necessary, in the event of a breach of the 14,800, not to extend the trend change below $12,500, an area of support that is currently the most protected by options operators.

Unlike Bitcoin, Ethereum yesterday oscillated in a range of $30, again attempting to stretch above $460 without success. For Ethereum a consolidation above $420, former resistance area, would give a strong signal of a possible bullish extension in the coming days.

For ETH, it is important not to break down the $365-360, where the bullish trend line that combines the rising lows of the last 7 months passes.

This level continues to be strongly protected by traders in options who prefer to cover their risk from possible falls. This indicates a more likely scenario for the continuation of the uptrend.